During my summer vacation, I managed to travel to a few of the biggest cities in Japan.  I’m sure you are fairly familiar with the capital and metropolis, Tokyo, but in addition to that I made reoccurring trips to Kyoto and Osaka.  In Osaka, one of the most hyped tourist attractions is the aquarium which is seven stories high and is the home to a beautiful, majestic whale shark.

The only other aquarium I have experienced in Japan, other than this one, was the Nagoya Aquarium.  I was quite impressed by it, so I had had high expectations in regards to Osaka.

Now with the heat and the crowds, it made for all sorts of excitement.  We had been looking to go through the aquarium quickly since it was our last day in Osaka and we had plans to go to Nagoya by the mid-afternoon.  In spite of our plan, the crowds did not allow us to move very briskly through the seven floors of seemingly bottomless exhibits.

From the beginning you start on the bottom floor.  Once you pass through a tunnel you go up an escalator that takes you to the top of the seven story aquarium.  As you make your way through the tour, you are supposed to experience themes based on the different inhabitants within the Ring of Fire in the Pacific Ocean.

One of my favorite aspects of visiting such an overcrowded place was that I had the chance to do it in Japan.  Watching how people react to the exhibits and how children, no matter where you go in the world, are children.

On the other hand, it was interesting to see how the two cultures differ in like situations.  An example of this was the number of parents that were constantly running into other people or smashing your feet with their strollers while blatantly ignoring that they were doing it.  Japan has some of the most polite people in the world, but for some reason they can be rather passive agressive in confined spaces.

Anyway, back to the action.  As you made your way down the ramp you were circling a giant tank.  On the other side were side exhibits with dolphins, seals, penguins, and other varying fish.  The center tank held the main attraction, the whale shark.  It is not easy to keep a whale shark in captivity, which makes it all the more precious for people to come and see.  Although it seemed to still be in the early stages of its life, it was rather large in comparison to the other fish.

It is easy to tell the maturity of a whale shark because the tail fin will be symmetrical when it is fully grown.  In other words, the top and bottom will be equal lengths.

As you can see there are a variety of fish and rays that are able to coexist with the whale shark considering they are rather docile creatures.  They are actually known as filter feeders, which means they prefer plankton, algae, and small fish.

Towards the end of the tour you approached smaller creatures of the sea.  Jellyfish seem to always be a favorite to someone.

In comparison to the Nagoya Aquarium, I would say that Osaka did not live up to its hype.  It was definitely worth going, and the price was not as high as expected, nearly $25, so there wasn’t much to be disappointed about.  However, if I were to recommend an aquatic experience, I would suggest you go to Nagoya instead.

I hope you enjoyed the pictures!  Come back for the next set. 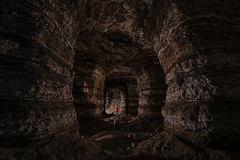