So I made a trip to Kanazawa yet again during Golden Week.  It was a successful trip to say the least and I was able to see a lot of my old friends.  We spent the first day at Kanazawa’s infamous, Kenrokuen Park.

I went to this park for the first time three years ago.  It was quite nostalgic coming back to see everything all over again.  It is said to be one of the top 3 parks in all of Japan with some beautiful sights inside.  However, just before we entered we made a stop at a small shrine that I also visited 3 years ago.

Afterward, we made our way into the park.  This isn’t much to tell about it other than it has so many levels of beauty.  The plants are terrific and there are several ponds dispersed throughout the area.  Fun fact, inside the park there are 8,750 trees and 183 different species.  That’s quite a park if I do say so myself.

The wildlife is so well preserved that it is breathtaking in almost any area of the park.  There is also a famous statue placed in the park that is said to be facing another statue featured miles away.

The park is also overlooking part of the city.  From the outskirts, you can see the city and surrounding mountains that encapsulate the park.

There are two main ponds within the park and between the two there is a natural pressure that is created.  From the pressure is a fountain that is said to be the oldest fountain in Japan.

Even the connecting streams were beautiful.

There is a variety of buildings standing within the park, from tea houses to old resting houses.  In addition, there are some small shrines, one of which was dedicated to studying.

I also enjoyed the fortunes that are offered to anyone that is interested in them.  They were given based on the honor system, since there was nobody to collect the money for each fortune.  It seems to be that way for a lot of fortunes and even some charms.

After seeing the entire inside of the park again, we went over to the castle grounds just next to the park.  There was a small event taking place so we browsed around for a bit.

With everything there is to see, it can take a toll on some people.  You may find yourself wanting to take a nap in some unusual places.

So that is Kenrokuen park.  Later that day we went to a Japanese wedding after party.  When I have some more time I’ll post some pictures.  Enjoy!!

I recently graduated from the University and am currently teaching English to all ages in Japan
View all posts by travelnihon »
« Another Day In Japan: Osu Kannon Temple
A Kanazawa Wedding Party » 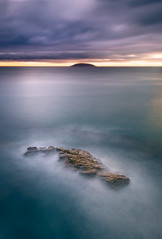