Adjusting To A New Culture

If you’re going to travel abroad, it is probably a good idea to research the cultural differences between your own country and the country you wish to travel to.  Seeing that Americans tend to assume the rest of the world changes to fulfill their needs, they can sometimes draw a lot of attention.  Anyway, that is not my focus.  My point is to discuss some basic cultural differences, tangible and intangible.

Prior to flying to Japan I read various books and took classes that prepared me for the differences between America and Japan(preparing to limit culture shock).  The two countries are quite similar from the exterior, but when you peel back a few layers the two can be polar opposites.

For example, shoes are removed before you enter a persons house.  However, this is not only restricted to houses.  Schools, restaurants, and other public places require you to remove your shoes before you step onto the main floor.  It may be confusing when you first experience it, but you catch on fairly quick. 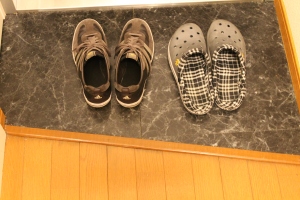 And the best part about it, they are located EVERYWHERE.  Some big names you may be familiar with are 7/11, Circle K, Thanks, Lawson, and Family Mart.

Another difference can be approached when shopping.  Foods are in large varieties, shapes, and sizes.  Although the sizes vary, the largest size is typically not so gargantuan.  One example can be found quickly when buying milk.  Milk does not come in one gallon, half gallon, or pint size containers.  Instead, milk is found in 1,000ml cardboard boxes, along with every other fruit juice, healthy beverage, or sometimes coffee.  You can of course find smaller sizes, but never one gallon jugs.  Another thing you may commonly see is 1.5L bottles of Coke and Pepsi rather than the standard 2L.

Of course, changes do not stop with beverages.  Bread can be a horrific sight in Japan.  I may be exaggerating a bit, but the lack of wheat bread is borderline ridiculous.  Not only that, but the variety of bread consists of all sorts of strange mixes.  To name a few, strawberry, blueberry, cinnamon, coffee, and buttered.  I mean come on, pre-buttered bread?  On top of that, bread comes in bags of 4-8 pieces.  Each ‘loaf’ is the same length, but the slices are cut bigger or smaller depending on whether you prefer 4, 5, 6, or 8 slices of bread.  I go with eight slices considering all others are monstrous.  To top it all off, each bag is roughly $2.00 and would probably be close to double what a loaf goes for in the U.S. considering the sizes.  I’m not sure what book can prepare you for something as treacherous as this. *slight sarcasm*

In addition to the bread, you can always find a large assortment of sandwiches, rolls, doughnuts, and other breaded items when shopping around.  Even convenience stores are stocked heavily in such items.  The sandwich below is a Cookie Cream Sandwich Roll.  In other words, chocolate cookie cream was added along with 450 or so calories. *Yum!!*  My only question is, where’s the lunch meat!!? 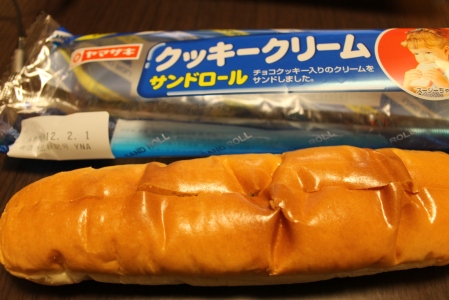 And next to the breads, you can find plenty of fruits and vegetables that look somewhat similar to what you will see in the U.S..  The only difference being is the variety.  Vegetables are a lot more abundant in terms of variety, and some of them I have never seen until I came to Japan.  The same goes for fruits considering Japan is close to some countries with very tropical climate which fruits can thrive in.  Please enjoy these pictures, I got quite a few strange looks and a few workers were laughing at me when I was taking pictures of the produce. 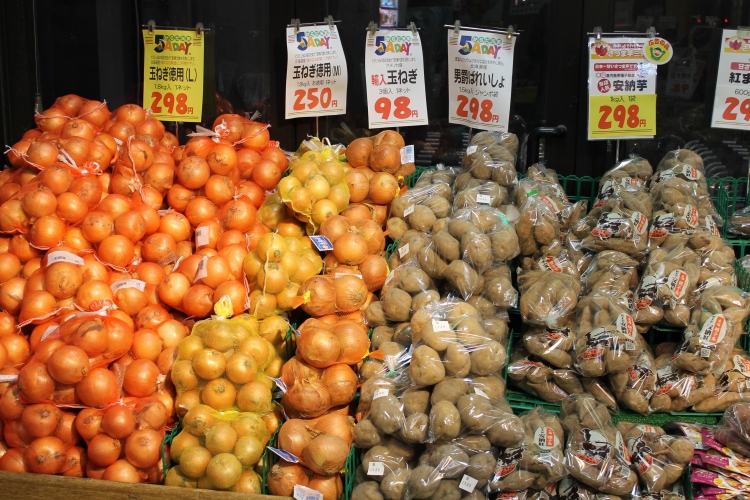 While we’re discussing shopping items, why not include something that you might not be able to see a lot of places in the world.  People in Japan love to eat everything.  Whether it’s seaweed or strange animals, it’s possible you can find it at your local grocery store.  How many of you have looked at an octopus or a squid at the zoo and thought, wow that looks good!  Well, I have. 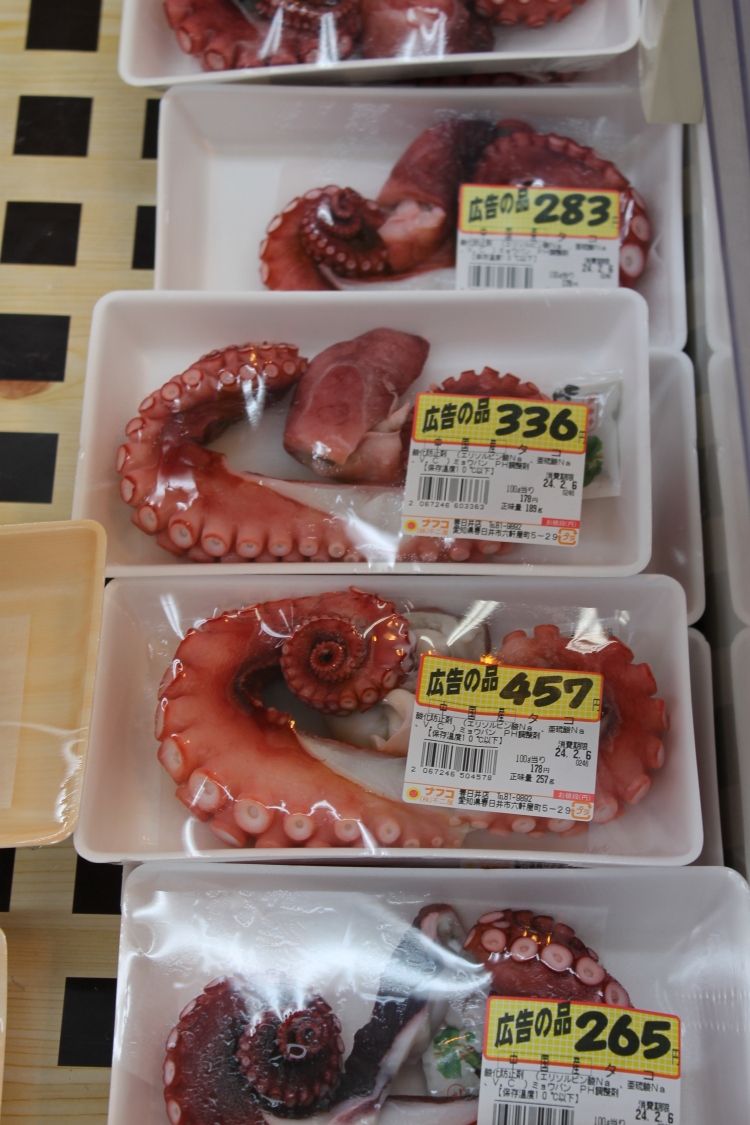 Moving on, clothes dryers are something of little importance in Japan.  Although they are not uncommon, they are rarely used.  Instead, clothes are hung outside in the sun for a more natural way of drying your clothes.  It is said that the sun helps to kill certain bacteria that remains after washing.  As a result, doing laundry takes a lot more time.  I have also heard that a downside to women hanging their clothes outside is that some of their delicates can go missing.  Hopefully nobody is interested in what I hang outside. 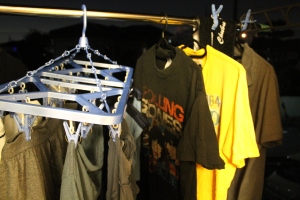 Pocket tissues are one of the first things you are introduced to at large train stations.  People will approach you in or around the station and simply hand you tissues filled with advertisements.  They are usually innocent, however that is not always the case.  The top and left ads are for couple matchmaking.  Hello Kitty at the bottom is advertising a potential Christmas present.  Not so innocent, on the right, is a club to meet girls.  The clubs can be found throughout Japan and are mainly based in big cities or by train  stations.  Their main targets are middle aged men or college students, but I’ll get into details in another blog.

The last custom I would like to address is gift giving.  Japan is well-known for its gift giving skills.  More specifically, it is extremely common to give souvenirs or gifts to close friends and family members.  In other cases, teachers can benefit greatly from this custom.  All teachers are not included, but I’m one of the lucky ones that is treated to some souvenirs from time to time.  I’ve been given snacks and candy souvenirs from Okinawa, Tokyo, Kyoto, Hiroshima, and others amongst them.  In addition to souvenirs from Japan, I’ve been lucky enough to receive gifts from Korea, Canada, America, Sweden, France, and Brazil for no reason other than being a part of the culture.  Here are a few I’ve held onto. 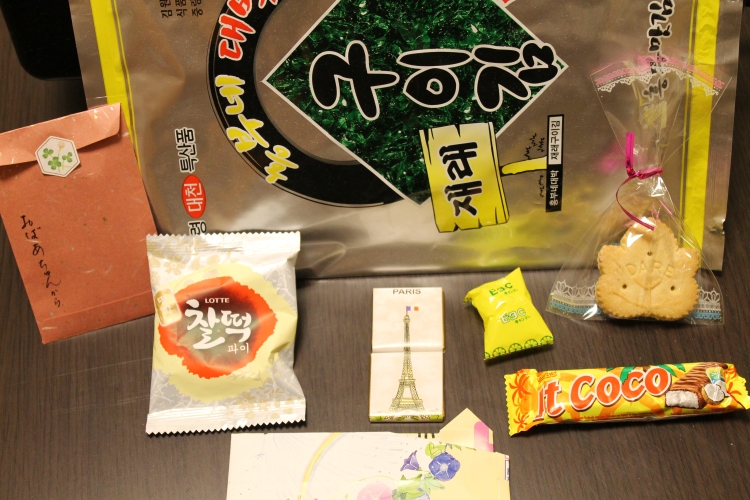 There is no special rule concerning what to give.  I once had a teacher who told me you could give hand towels with strange logos attached to them as gifts.  Chances are you won’t need to use the hand towels for anything, but it’s a good idea to keep it and write the senders name on it.  Next time the person comes to your house, you can take it out of storage and present it in your bathroom.  The point of it all being that importance is placed upon the gesture and not so much the gift itself.

So if you ever go to a different country, there will always be things you’ve never read about.  Some differences are so simple that after a while you forget what’s different about it.  Other things stick out no matter how long you are there.  Some differences are better than others, and some you’ll wish to change everyone’s mind about it (dryers dryers dryers).  Otherwise, you will be hit hard with culture shock.  Sometimes you can’t prepare for what happens, but it’s good to hear from others that have experienced it to soften the blow.

258 thoughts on “Adjusting To A New Culture”